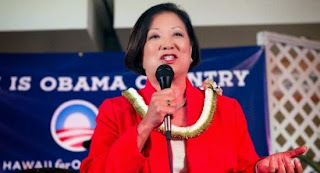 If one of these animals kills an American after returning home, the blood is on Democrat freshman Hawaii senator Mazie Hirono's hands.


A showdown over the passports of so called ‘foreign fighters’ – Americans and other westerners who have joined the ISIS terror army in Iraq and Syria – came to a head on Thursday when a U.S. senator killed legislation aiming to strip them of their citizenship.
Democrat Mazie Hirono, a freshman senator from Hawaii, objected on the Senate floor when Republican Sen. Ted Cruz of Texas tried to fast-track his ‘Expatriate Terrorists Act.’
Cruz bypassed the Senate’s committee process in order to rush the legislation to a vote, meaning that any single senator could block it.
Since the Senate is sprinting through its final days in session this year, he said, putting the bill through committee ‘would mean that it could not pass in time to prevent Americans fighting right now with ISIS from coming back and murdering other Americans.’
‘There is an urgency and an exigency to this situation,’ Cruz said on the Senate floor.
Hirono said she chose to throw up a road block because ‘legislation that grants the government the ability to strip citizenship from Americans is a serious matter raising significant constitutional issues.’
She also cited letters of objection from the Constitution Project and the American Civil Liberties Union.
Keep On Reading…