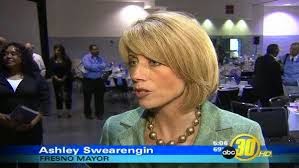 Via The LA Times:


The state Republican Party’s fall convention opened on a sour note Friday when the night’s keynote speaker acknowledged she might vote to reelect Democratic Gov. Jerry Brown.
Fresno Mayor Ashley Swearengin, the star of the evening’s tribute to Republican women and a candidate for state controller, told reporters she still hadn’t made up her mind whether to vote for Brown or Neel Kashkari, his GOP opponent in the Nov. 4 election.
“I’m looking at the two candidates like other Californians are,” she said.