Stupid: Obama administration responds to tsunami of illegal minors by initiating a program to bring in more... 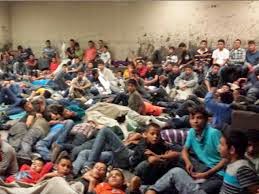 WASHINGTON (AP) -- The Obama administration is initiating a program to give refugee status to some young people from Honduras, Guatemala and El Salvador in response to the influx of unaccompanied minors arriving at the U.S.-Mexico border.
Under the program, immigrants from those countries who are lawfully in the United States will be able to request that child relatives still in those three countries be resettled in the United States as refugees. The program would establish in-country processing to screen the young people to determine if they qualify to join relatives in the U.S.
In a memorandum to the State Department Tuesday, President Barack Obama allocated 4,000 slots for refugees from Latin America and the Caribbean for next year.