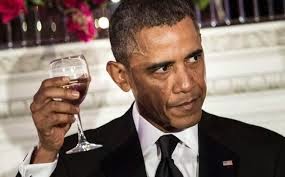 It's the only thing Obama is really good at...


Despite many Democratic politicians distancing themselves from President Obama’s low approval ratings and declining his assistance– even in their own backyard– he’s still doing a good amount to help raise money for various groups. So far this year, on average, Obama is attending a fundraiser every 5 days.
According to a new report, Obama has appeared at 49 fundraisers this year through September 15 — even taking the time out of his beloved vacation at Martha’s Vineyard this past August.
“When we looked at Obama’s fundraising in May, we figured out that he was on pace to go to a fundraiser every six days or so. Now, he’s at five-and-a-quarter. That’s thanks to a particularly active summer; the president even attended a fundraiser during his putative vacation on Martha’s Vineyard in August.”
Keep on Reading…