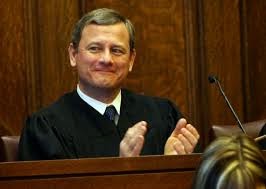 If anyone thinks Robert's Obamacare vote was based on law, not politics, I have a bridge in Brooklyn to sell them.  John Roberts can't be this stupid. I must surmise he is being disingenuous.

LINCOLN — While political partisanship flourishes in the halls of Congress, it has no place in the chambers of the U.S. Supreme Court, the chief justice said Friday in remarks to Nebraska law students.
Chief Justice John Roberts Jr. said he worries that the partisan rancor of the age has skewed the public understanding of the court’s role in government. During a 55-­minute talk at the University of Nebraska College of Law, he stressed that the rule of law, rather than politics, drives the court’s decisions.

“We are not Democrats and Republicans in how we go about it,” he told an audience of 500, as estimated by university officials. “In nine years, I’ve never seen any sort of political issue like that arise between us.”