Sen. Mary Landrieu (D-La.) took 43 campaign trips that were paid for with funds for official business... 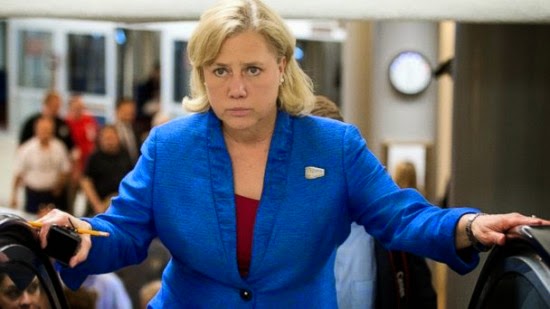 I wonder if she visited the room in Louisiana she is supposed to be renting from her parents?


Sen. Mary Landrieu (D-La.) found that over $33,700 in campaign flights were inappropriately charged to her official account in an internal review of her finances released Friday.
The report is sure to draw added scrutiny to her use of charter planes just as her main opponent, Rep. Bill Cassidy (R-La.), is set to introduce a resolution meant to highlight such spending, which he calls a “waste of Americans’ hard-earned tax dollars.”
The review, which was released four days after her self-imposed deadline of Sept. 8, found that the senator took 43 trips, which amounted to 136 campaign functions, that were paid for by funds meant for official business only. Eleven percent of the total amount Landrieu’s office paid for chartered flights should have been paid out of her campaign funds, the review found.
Landrieu’s office said she fully reimbursed the Treasury with campaign funds and has notified the Senate Ethics Committee of the errors. She also said in a statement that she’s implemented a new bookkeeping system to prevent similar errors from happening again.[...]