Report: Clinton insiders screened Benghazi documents before they were turned over... 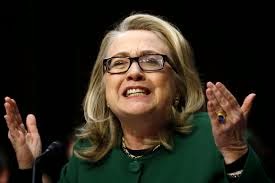 I would wonder if some of the documents were stuffed into socks and underwear by the Clinton insiders. Hillary would respond, "What difference does it make?"

Via The Daily Signal:

As the House Select Committee on Benghazi prepares for its first hearing this week, a former State Department diplomat is coming forward with a startling allegation: Hillary Clinton confidants were part of an operation to “separate” damaging documents before they were turned over to the Accountability Review Board investigating security lapses surrounding the Sept. 11, 2012, terrorist attacks on the U.S. mission in Benghazi, Libya.
According to former Deputy Assistant Secretary Raymond Maxwell, the after-hours session took place over a weekend in a basement operations-type center at State Department headquarters in Washington, D.C. This is the first time Maxwell has publicly come forward with the story. …
When he arrived, Maxwell says he observed boxes and stacks of documents. He says a State Department office director, whom Maxwell described as close to Clinton’s top advisers, was there. Though the office director technically worked for him, Maxwell says he wasn’t consulted about her weekend assignment.
“She told me, ‘Ray, we are to go through these stacks and pull out anything that might put anybody in the [Near Eastern Affairs] front office or the seventh floor in a bad light,’” says Maxwell. He says “seventh floor” was State Department shorthand for then-Secretary of State Clinton and her principal advisors.
“I asked her, ‘But isn’t that unethical?’ She responded, ‘Ray, those are our orders.’ ”