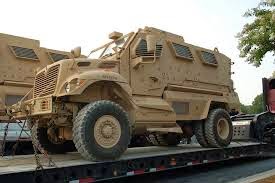 These morons need to find another outlet for their testosterone. Also, they seem to have too much money on their hands. School police don't need armored vehicle suitable for combat in Afghanistan. They plan to paint a red cross on the side. That will make all the difference.


The nation gaped at the sight of a military-grade Mine-Resistant Ambush Protected vehicle trundling through Ferguson, but it turns out that was relatively restrained policing.
Relative, that is, to San Diego, where police will use a similar steel behemoth for the city’s schools.
The San Diego Unified School District Police Department has acquired its own vehicle, known as a MRAP, and expect it to be operational by October.
“I can totally see people thinking ‘Oh, my God. Are they going to be rolling armoured vehicles into our schools and what the hell’s going on?’” Captain Joe Florentino told local media.
Police intended to use it to rescue children – be it from rampaging gunmen or natural disasters, he said. “When we have an emergency at a school, we’ve got to get in and save kids.”