ISIS bans math, social studies and sports in schools parts of war-torn Syria under their control... 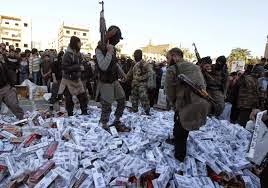 How can anyone support these morons?


Dubai:  Thousands of children in swaths of war-torn Syria, now controlled by dreaded Islamic State militants, can no longer study math or social studies under new diktats issued by the jihadists.

While sports is banned, the children will not be allowed to learn about elections and democracy.

Instead, the children will be subjected to the teachings of the radical Islamist group. And any teacher who dares to break the rules "will be punished."