Richard Branson pledged $3 billion for green fuel, but decided he wanted to keep his green? 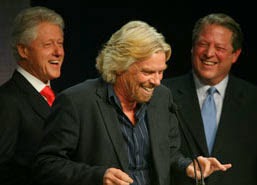 I have found most on the left are frauds who are mainly interested in themselves.


Richard Branson has failed to deliver on his much-vaunted pledge to spend $3bn (£1.8bn) over a decade to develop a low carbon fuel.
Seven years into the pledge, Branson has paid out only a small fraction of the promised money – “well under $300m” – according to a new book by the writer and activist, Naomi Klein.
The British entrepreneur famously promised to divert a share of the profits from his Virgin airlines empire to find a cleaner fuel, after a 2006 private meeting with Al Gore.
Branson went on to found a $25m Earth prize for a technology that could safely suck 1bn tons of carbon a year from the atmosphere. In 2009, he set up the Carbon War Room, an NGO which works on business solutions for climate change.
But by Klein’s estimate, Branson’s “firm commitment” of $3bn failed to materialise.
“So the sceptics might be right: Branson’s various climate adventures may indeed prove to have all been a spectacle, a Virgin production, with everyone’s favourite bearded billionaire playing the part of planetary saviour to build his brand, land on late night TV, fend off regulators, and feel good about doing bad,” Klein writes in This Changes Everything, Capitalism vs The Climate.