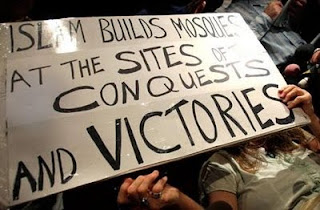 Most Americans understand the Muslim group has a right to build a Mosque anywhere local zoning laws allow, but it is wrong to build one on the hallowed soil of Ground Zero. For some reason, President Obama just doesn't get it. Voters don't understand why President Obama has taken such a boneheaded position.

The Muslim group has the right to build a mosque and cultural center near Ground Zero, American voters say 70 – 25 percent. But voters say 63 – 28 percent that it is wrong to do so. There is no sub-group which says it is “appropriate” to build the mosque near Ground Zero.