Waaa! Waaa! RINO Murkowski claims she was "smeared" by the Tea Party Express. 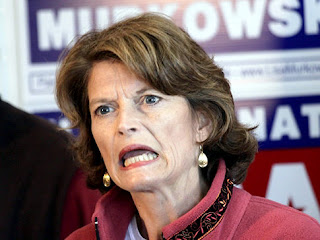 The Republican base is sick of career politicians who wear the Republican label out of convenience, not conviction or loyalty. RINO Lisa Murkowski has shown her true colors and declared herself as a write-in candidate. Her chances of winning as a write-in are slim and none. However, she could take a few votes from the GOP candidate Alaska attorney Joe Miller. Miller is a fine Conservative candidate and expected to win. He is a West Point graduate, Yale graduate and has experience as a judge. Miller will most likely win with Murkowski in the race and would have coasted to victory without her interference. Lisa Murkowski has put ego and sour grapes above the interests of Alaska and the GOP. She is a traitor to her party and should be banished to the ash heap of history.

“What happened in my particular race, you had the Tea Party Express, this California-based group, come in at the last minute in a campaign, run a mudslinging, smear - just a terrible, terrible - campaign with lies and fabrications and mischaracterizations,” Murkowski told CNN’s Candy Crowley in an exclusive interview. “They came in, dumped $600,000 into a small market here in Alaska, and they absolutely clearly influenced the outcome.”

By the way, she apparently doesn't care what her former friends in the Republican Party think.

Speaking on CNN, the Alaska Republican said she is not concerned with making the Republican leadership happy.

Murkowski was considered one of Senate Minority Leader Mitch McConnell's top aides. McConnell has been forced to tell her to "move on."
Posted by Bluegrass Pundit at 10:53:00 AM

Why are 'so called' moderate republicans such sore losers?

Folks like Lisa just don't get it. They feel entitled to their power and position, country be damned!

The Tea Party movement is not a fight for the heart and soul of the Republican party! A co-opted media led by a hard core left wing wanna be dictatorship government would want you to believe that it is in fact all about the Republicans. And they would be dead wrong! The Tea Party movement is a fight for the heart and soul of our country! It is a fight to return us to what made us the greatest country in the world! How sad that entrenched politicians on the right along with the leftist garbage on the left cannot or refuse to understand such a basic tenet!

It is mind blowing how the media and progressives simply miss what is going on - or do they? Maybe they do know what is going on and it scares them into apoplectic fits. Maybe they aren't as dumb as they pretend to be and are just looking for a chance to slip the knife into the
Tea Party and kill it for good.

We will crawl over glass for change.