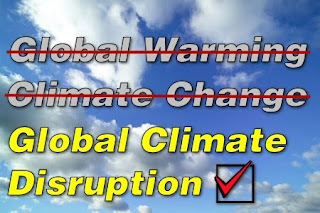 This seems a wise strategy by radical environmentalists and left-wingers. They are attempting to control people politically based on fear of "Global Warming." Unfortunately for them, warming can be measured. Facts indicate global cooling is headed our way for at least the next thirty years. After "Global Warming" was cast in doubt by the facts and Climategate, environmentalists and left-wingers started using "Global Climate Change." However, that didn't prove scary enough. Now, our official fraudulent “Science Czar” is attempting to re-brand "Global Warming" as “Global Climate Disruption.” That should be perfect for them. It both sounds scary and is unmeasurable.

From the administration that brought you “man-caused disaster” and “overseas contingency operation,” another terminology change is in the pipeline.

The White House wants the public to start using the term “global climate disruption” in place of “global warming” — fearing the latter term oversimplifies the problem and makes it sound less dangerous than it really is.

White House science adviser John Holdren urged people to start using the phrase during a speech last week in Oslo, echoing a plea he made three years earlier. Holdren said global warming is a “dangerous misnomer” for a problem far more complicated than a rise in temperature.

This scam keeps getting worse, AL Gore and friends are trying desperately to hang on, but another scary aspect is any time they try and push people toward calling something a specific new title, it is generally always a bad sign.