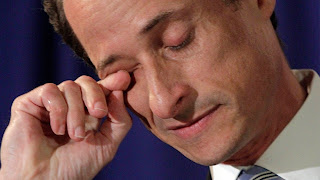 Disgraced ex-Rep. Anthony Weiner is now a daddy. Let's congratulate him and hope his son turns out better than he did.


Don’t expect to see the baby photos on Twitter.

Disgraced ex-Rep. Anthony Weiner, who resigned his Congressional seat in disgrace amid an online sex scandal, became a Dad Wednesday night, according to sources.

Weiner’s wife, Huma Abedin, gave birth to Jordan Zain Weiner, who weighed in at 7 lbs., 5 oz.
The child, who arrived ten days before his due date, enters a household forever changed by Weiner’s stunning fall from grace.