Change: Nour Salafist party wants to cover the great pyramids in wax or something 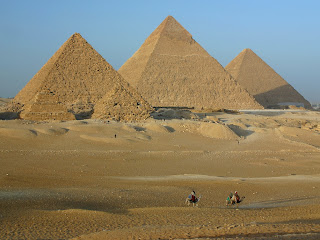 
(Daily Mail) — The pyramids at Giza are the most stunning sight I have ever seen.
True, their lonely eminence is threatened by Cairo’s unlicensed building sprawl, with half completed houses inching their way towards them.

Surveying them at night as the calls to prayer multiplied into a thunder of sound from central Cairo already told me a few years back what was coming.

For now members of the Nour (The Light) Salafist party, which won 20 per cent of the vote in recent elections, are talking about putting an end to the ‘idolatry’ represented by the pyramids.


This means destruction — along the lines essayed by the Afghan Taliban who blew up the Banyam Buddhas — or ‘concealment’ by covering them with wax. Tourists would presumably see great blobs rather than the perfectly carved steps.

This last suggestion was made by Abdel Moneim Al-Shahat, a Nour candidate for parliament. Apart from wanting to do away with this ‘rotten culture’, this gentleman also wants to ban the Nobel prize winning novels of Naguib Mahfouz, one of many great Egyptian writers. Read more here...