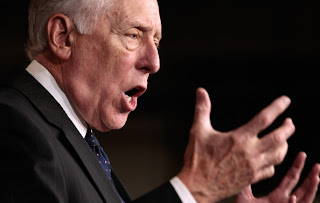 Passing bills no one has read is a democratic tradition.


(The Hill) — House Minority Whip Steny Hoyer (D-Md.) on Friday afternoon called on his colleagues to support the $1 trillion omnibus spending bill, even though no one — or almost no one — has read it.

“I rise in strong support of this bill, and I urge my colleagues to support this piece of legislation,” he said. “None of them have read it.”

He quickly acknowledged that House Appropriations Committee Chairman Hal Rogers (R-Ky.) read the bill, and that ranking member Norm Dicks (D-Wash.) probably read it as well. But he said that despite his support for the bill, he is not a fan of the process that Republicans used to bring the bill forward so quickly, and at the last minute, for passage.

“Had I as majority leader brought that bill that sits on that floor, 1,207 pages, within the last 24 hours to the floor, I think the response from that side of the aisle would have been harsh, accusatory and not helpful,” Hoyer said.

Hoyer said the process should be a “lesson in humility” for all members. The House is expected to approve the bill later this afternoon and send it to the Senate.

I'm very much afraid, my friend, that both parties are up to their eyeballs in chicanery and a gutting of the Constitution. Just days ago our elected representatives passed a Defense Authorization bill which - quite literally - eliminates the 5th Ammendment. The bill, introduced by the contemptable CArl Levin and John McCain allows for unlimited detention of anyone - Americans included - who our wonderful government designates a "terrorist". No indictment, no trial, no nothing. Just never-ending imprisonment.

And the disgusting Republicans joined he disgusting Democrats in passing this bill and the monster Obama will sign it.

So much for the "land of the free and home of the brave".