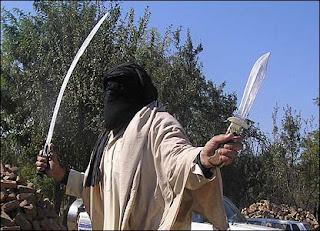 You can't negotiate with Islamist terror groups. They think it is moral to lie to infidels.


WASHINGTON (Reuters) — The Obama administration is considering transferring to Afghan custody a senior Taliban official suspected of major human rights abuses as part of a long-shot bid to improve the prospects of a peace deal in Afghanistan, Reuters has learned.

The potential hand-over of Mohammed Fazl, a ‘high-risk detainee’ held at the Guantanamo Bay military prison since early 2002, has set off alarms on Capitol Hill and among some U.S. intelligence officials.

As a senior commander of the Taliban army, Fazl is alleged to be responsible for the killing of thousands of Afghanistan’s minority Shi’ite Muslims between 1998 and 2001.

According to U.S. military documents made public by WikiLeaks, he was also on the scene of a November 2001 prison riot that killed CIA operative Johnny Micheal Spann, the first American who died in combat in the Afghan war. There is no evidence, however, that Fazl played any direct role in Spann’s death.