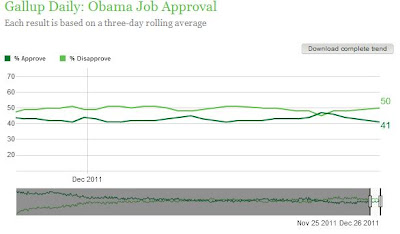 Via Gallop
Obama's early week surge in popularity seems to be short-lived.


President Obama enjoyed a surge in popularity this week — but the bounce proved to be remarkably short-lived.

A Gallup tracking poll released Thursday showed that Obama is once again underwater, plummeting to 41 percent approval and 50 percent disapproval, a sharp drop from earlier in the week.

A survey released Monday showed the president had a sudden uptick in the opinion poll, with 47 percent of respondents approving of the way he was handling his job and 45 percent disapproving. It was the first time since July that more people viewed him favorably than unfavorably.