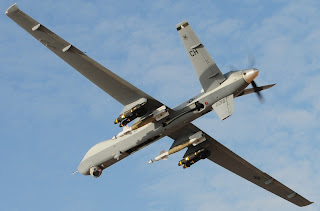 The CIA has suspended drone attacks in Pakistan.


(LA Times) — In an effort to mend badly frayed relations with Pakistan, the CIA has suspended drone missile strikes on gatherings of low-ranking militants believed to be involved in cross-border attacks on U.S. troops or facilities in Afghanistan, current and former U.S. officials say.

The undeclared halt in CIA attacks, now in its sixth week, is aimed at reversing a sharp erosion of trust after a series of deadly incidents, including the mistaken attack by U.S. gunships that killed 24 Pakistani soldiers last month.

The pause also comes amid an intensifying debate in the Obama administration over the future of the CIA’s covert drone war in Pakistan. The agency has killed dozens of Al Qaeda operatives and hundreds of low-ranking fighters there since the first Predator strike in 2004, but the program has infuriated many Pakistanis.

Some officials in the State Department and the National Security Council say many of the airstrikes are counterproductive. They argue that rank-and-file militants are easy to replace, and that Pakistani claims of civilian casualties, which the U.S. disputes, have destabilized the government of President Asif Ali Zardari, a U.S. ally.

I'm sure everything will be fine. Just look at how much better Iraq is now that, errrrr. . . . skip that .

"I'm sure everything will be fine. Just look at how much better Iraq is now that, errrrr. . . . skip that"

Ouch! Merry Christmas to you!