Obama's approval among Latinos drops below 50% 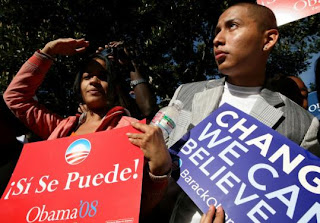 Time for Team Obama to panic and roll out some kind of illegal immigrant amnesty program.

From The National Journal:


President Obama’s support among Latino voters has declined over the past year, but he still carries more support from them when matched up against potential Republican opponents ahead of the 2012 election, according to a survey of Latino adults released on Wednesday by the Pew Hispanic Center.

While 58 percent of Latinos approved of Obama’s performance as president in 2010, 49 percent of them now approve, according to the poll. Meanwhile, 59 percent of Latinos disapprove of how the Obama administration is managing the deportation of illegal immigrants, while only 27 percent approve.