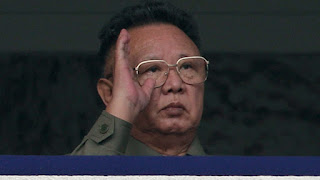 A party would have been more appropriate.

UNITED NATIONS  – The UN General Assembly granted a request from North Korea and held a few moments of silence Thursday for Kim Jong-il, the country’s former leader who died Saturday, though Western delegations boycotted it.

Nassir Abdulaziz Al-Nasser, president of the 193-nation assembly, called for a “minute of silence” before the start of a routine meeting at 3:00 p.m. EST in the half-empty UN General Assembly hall.

“It is my sad duty to pay tribute to the memory of the late Kim Jong-il, Secretary-General of the Workers Party of Korea, Chairman of the National Defense Commission of theDemocratic People’s Republic of Korea and Supreme Commander of the Korean People’s Army, who passed away on Saturday, Dec. 17,” he said.