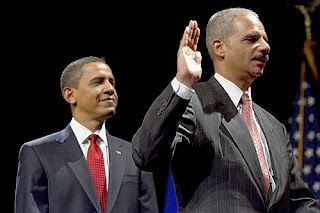 AG Eric Holder blames criticism of him and Obama on the fact they are African-Americans. The actual reason is incompetence.


(NYT) —  [...] In the interview, Mr. Holder offered a glimpse of how he viewed the criticism. He said he thought some critics — like Senator Lindsey Graham, a South Carolina Republican who favors allowing the military to handle terrorism suspects over the criminal justice system — are expressing “good faith” arguments about their policy disagreements.

But Mr. Holder contended that many of his other critics — not only elected Republicans but also a broader universe of conservative commentators and bloggers — were instead playing “Washington gotcha” games, portraying them as frequently “conflating things, conveniently leaving some stuff out, construing things to make it seem not quite what it was” to paint him and other department figures in the worst possible light.

Of that group of critics, Mr. Holder said he believed that a few — the “more extreme segment” — were motivated by animus against Mr. Obama and that he served as a stand-in for him. “This is a way to get at the president because of the way I can be identified with him,” he said, “both due to the nature of our relationship and, you know, the fact that we’re both African-American.”