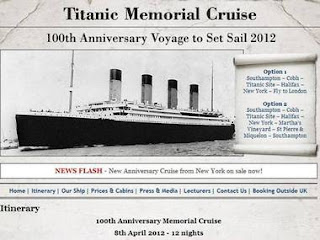 What could possibly go wrong?


For some, it might sound too much like tempting fate – and for others, it smacks of "disaster voyeurism". But for more than 2,000 Titanic enthusiasts, the chance to mark the centenary of the maritime disaster by sailing on a large cruise ship to commemorate the sinking on the very spot of the tragedy is proving difficult to resist.


A British company has almost sold out two cruises for people to mark the anniversary on 15 April by following the route of the Titanic to where it struck an iceberg. The booming demand for Titanic-related travel has led to another travel company offering the chance to explore the wreckage of the ill-fated vessel in a Russian-built submarine next summer at a cost of $59,000 (£37,000) per person. Places for that voyage are already "very limited".

Email ThisBlogThis!Share to TwitterShare to FacebookShare to Pinterest
Labels: Titanic