Comedy Gold: Cantankerous GOP Rep. Jim Sensenbrenner on Michelle Obama: “she lectures us on eating right while she has a large posterior herself.” 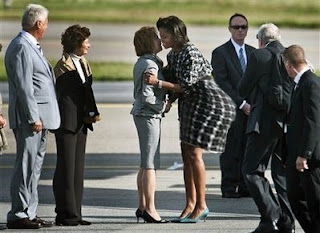 
“she lectures us on eating right while she has a large posterior herself.”

(Fishbowl DC) — Rep. Jim Sensenbrenner (R-Wisc.), known for his cantankerous ways and for not speaking to media unless it’s his idea, was overheard at the Delta Crown lounge at Reagan National Airport today talking on his cellphone about an incident he said occurred three weeks ago while at an Episcopal church auction. Please note, a church auction.

Our source, a Democratic operative who heard the whole thing, said he was “very loud”. Sensenbrenner was overheard saying that after buying all their “crap” (his word) a woman approached him and praised first lady Michelle Obama. He told the woman that Michelle should practice what she preaches — “she lectures us on eating right while she has a large posterior herself.”

Photoshopped image of Ms. Obama. Where is Mr. Sensenbrenner's image so we can laugh at it? No photoshopping required. You are children !!!