Karma: Shoplifters have car burglarized while they were shoplifting (with mugshot goodness) 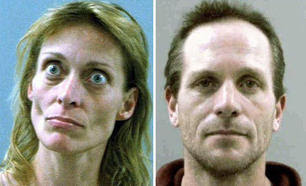 The shoplifters were caught and cited. The burglar seems to have escaped for the time being.


OGDEN — Two people cited for shoplifting became victims of a crime themselves.

While they were questioned in the shoplifting case, police say someone broke into their vehicle and stole a stereo and several other items. It happened about 5 p.m. Thursday at the WinCo Foods at the corner of Wall and 12th Street in Ogden.

“Store security had the individuals in custody, in their office,” Ogden Police Lt. Eric Young said. “They had reviewed surveillance video and recovered stolen property from the suspects.”

Police say Eldon Alexander, 36, and 47-year-old Korin Vanhouten tried to walk out of the store with several small-ticket items like makeup, energy bars and batteries. They were cited for shoplifting and let go.

But as the officer started to leave, “He sees the two suspects trying to flag him down in the parking lot,” Young said, “and he goes over to their location and realizes that their vehicle has actually been burglarized.”