Irony: Obama's plan to destroy ISIS relies on the 2001 Authorization to Use Military Force he vowed to repeal... 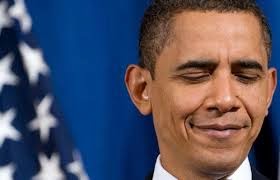 
President Barack Obama’s plans to ramp up U.S. airstrikes against Islamic State targets inside Iraq and potentially launch new ones inside Syria rely on a thirteen-year-old law authorizing military force against al Qaeda and its affiliates that he has publicly stated he would like to see repealed.
In a landmark speech last year in which he pledged to take the United States off a “perpetual wartime footing,” Obama said that he would work with Congress to “refine” and “ultimately repeal” the 2001 Authorization to Use Military Force, or AUMF, a measure hastily passed in the chaotic, fear-filled days following the attacks of Sept. 11, 2001. That measure authorized “all necessary and appropriate force against those nations, organizations, or persons” responsible for the attacks.”
In his remarks Wednesday, Obama made clear that he believes he can take action against Islamic State militants without congressional approval but extended an olive branch to Capitol Hill, saying that he welcomed “congressional support for this effort in order to show the world that Americans are united in confronting this danger.” The White House is currently seeking congressional approval for a program to train and arm the Syrian opposition, one of the few things Obama doesn’t believe he can do unilaterally. To date, the administration has mostly sidestepped the 1973 War Powers Resolution, which mandates that the president seek congressional approval of any military action after 60 days of informing Congress that U.S. troops have been deployed in hostilities.