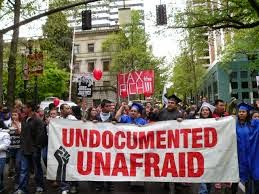 What happened to Undocumented Workers?


Informal workers are growing part of California’s economy — a shift keenly felt in the construction industry, where 1 in 6 workers is either off the books or misreported, new research has found.
Construction businesses in the state employ roughly 895,000 workers, according to a report by downtown Los Angeles research group Economic Roundtable that was released Sunday. In 2011, 143,900 of those workers labored unofficially.
Some 39,800 workers were misclassified by employers as independent contractors, despite not owning their own tools or setting their own schedules. An additional 104,100 workers weren’t recorded at all.