The anus of the Democratic Party refuses to apologize for using "wife beater' terms against Gov. Scott Walker... 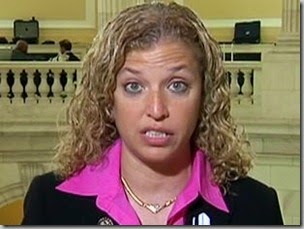 
Democratic National Committee (DNC) Chairwoman Debbie Wasserman Schultz admitted fault Thursday for saying that Republican Wisconsin Gov. Scott Walker has “given women the back of his hand” and is “grabbing us by the hair.”
“I shouldn’t have used the words I used,” Wasserman Schultz said in a statement to CBS News.
Wasserman Schultz did not apologize to Walker or other Republicans, but rather doubled down in her line of attack on Walker.
“That shouldn’t detract from the broader point that I was making that Scott Walker’s policies have been bad for Wisconsin women,” Wasserman Schultz said. “Whether it’s mandating ultrasounds, repealing an equal pay law, or rejecting federal funding for preventative health care, Walker’s record speaks for itself.”
Keep on reading…