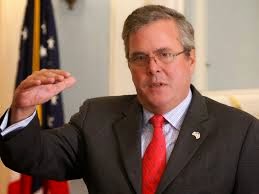 In other words, he is planning on raising taxes if that is needed to get a deal from Democrats...


Jeb Bush wanted to talk about tax reform, which he hopes to make central to his presidential bid.
But, at a National Review summit in Washington on Thursday, the discussion pivoted to Bush’s refusal to sign Grover Norquist’s anti-tax pledge.
“Is there any circumstance in which you would take that pledge?” asked National Review Editor Rich Lowry.
“No,” Bush said firmly — and began, as he does when he is asked this question, to lay out his record: as Florida governor, he reminded Lowry, he cut taxes every year.
“My record is clear,” Bush concluded. “In fact, my record is as good or better than any.”
But Lowry pressed Bush on the pledge. “So, it’s a principled opposition to pledges of that sort?”
“Yeah,” Bush said.
“So, will you promise not to raise taxes?” Lowry tried, to laughter from the crowd.
This week, Sen. Marco Rubio signed the pledge as a presidential candidate, as he has during previous campaigns. Sens. Ted Cruz and Rand Paul, too, have signed on the dotted line.