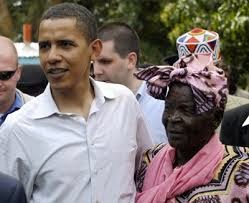 They don't even think Obama is Barack Obama Sr.'s son?


According to reports, President Obama’s Kenyan family has now completely “disowned him.”
The much-chronicled “complicated” relationship between Obama and his Kenyan family has reportedly utterly collapsed in the last few years, the family accusing him of turning a blind eye to them and only touting his Kenyan heritage for “political expediency.” As the NY Times noted in April 2014, though Obama consistently “distanced” himself from the family as president, his Kenyan heritage was a “powerful element” of his first presidential campaign, when he sold himself as “a candidate who connect different worlds,” even inviting a delegation of his African relatives to his 2009 inauguration.
The relationship really melted down last year when Obama allegedly stonewalled the family over the funeral of Obama’s aunt Zaituni, which the president skipped in order to play another round of golf.
According to a Kenyan news outlet, the president’s family has now entirely disowned him. One of his more vocal critics, his half-brother, Malik Obama (son of Barack Obama Sr), maintains that Obama is not actually the son of Barack Obama Sr. Malik’s evidence: Barack looks and behaves nothing like Obama Sr. Most likely, Malik claims, the president was born of an affair between his mother Ann Dunham and communist poet Frank Marshal Davis—a conspiracy theory that has circled around for years.
Keep on reading…