Scary: Russia will have robo soldiers by 2020? 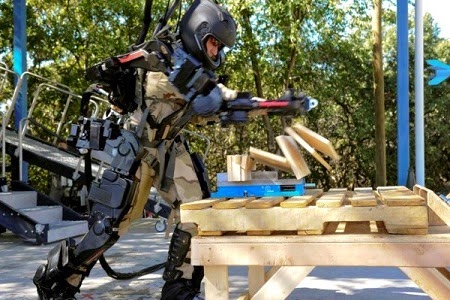 It is unclear how much exoskeletons would improve combat effectiveness, but mobility and the weight they could back would be greatly improved.


It may not be sharks with frickin’ laser beams attached to their heads, but for a leader bent on expanding his global sphere of influence, an army of soldiers equipped with mind-controlled robotic exoskeletons may be the next best thing. According to Russian media, that’s just what President Vladimir Putin’s army has in the pipeline.
On Wednesday, the headline on the government-run Sputnik News website was, “Lock and Load: Russian Hybrid Robo-Soldiers Could Be Just Five Years Away.” Russia Today, the equally servile outlet aimed at English speakers led with “Iron Man mass production? Russian army may get combat exoskeletons by 2020.” Even the more independent Moscow Times trumpeted, Russian Army May Have Superhuman Mind-Controlled Exoskeletons in 5 Years.
None of this, of course, means that a Russian army of Terminator-like super-soldiers is around the corner. But that wasn’t stopping speculation.
“The Russian Army is set to receive mind-controlled exoskeletons,” Sputnik reported. “The wearable robots will be controlled by brain waves and will increase the strength and endurance of the serviceman wearing it by several times.”
Russian soldiers equipped with the new gear, according to Sputnik, would be able to carry more than 600 pounds of gear. Their endurance, it added, would also be greatly increased.
Keep on reading…