64% of Americans Cut Back Vacation Plans Due to Economy. Obama is Taking His Second Vacation in a Month. 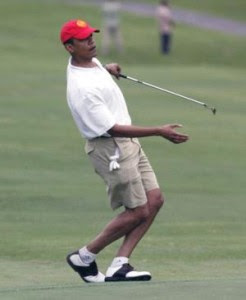 Only 35% of ordinary Americans are planning a summer vacation this year according to a Rasmussen survey. Harsh economic conditions have forced families to cut back.

Just 35% of Americans plan to take a summer vacation this year, and most of those vacationers don't plan to spend as much as they have in years past, according to a new Rasmussen Reports national telephone survey..

President Obama isn't an ordinary American. He is on his second vacation in a month. It is good to be King President.

Obama will not honor the fallen unknown Soldier like an American President being in Chicago. Hope he feels safe in a gunless society.

Of course he's going on vacation.

Arrogance has no borders.