Obama Decides on Sestak Story: "Bubba" did it 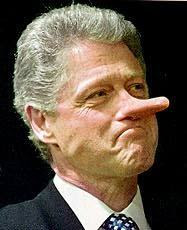 The White House has decided to blame the illegal Joe Sestak job offer on former President Bill Clinton. This gives them some distance and plausible deny-ability about the actual language used. In many ways, Bill Clinton is the perfect fall guy. Obama has leverage over him because of Hillary's position as Secretary of State. Additionally, the White House claims it was an unpaid job as an adviser. This makes the illegality a gray area. Bill Clinton certainly has credibility about offering unpaid positions. He is well known for the 'unpaid' position he put Monica Lewinsky in. Bill Clinton had lunch with President Obama yesterday. Was this to finalize their story? Bill Clinton wouldn't take a hit like this for free. I wonder what Obama offered him? So far, Bill Clinton is refusing to comment. Joe Sestak is desperate to put this behind him because it has become a campaign issue. Sestak wasted no time corroborating the White House story. Obama and his advisers must think Americans are idiots if they expect us to believe Sestak could be be dissuaded from running for the Senate by an unpaid advisory position most people never knew existed. Here is the text of the White house memo (pdf).

Senior White House advisers asked former President Bill Clinton to talk to Joe Sestak about whether he was serious about running for Senate, and to feel out whether he’d be open to other alternatives, according to sources familiar with the situation.

But the White House maintains that the Clinton-Sestak discussions were informal...

According to the sources, White House chief of staff Rahm Emanuel asked Clinton and his longtime adviser, lawyer Doug Band, to talk to Sestak about the race. It’s unclear right now whether the White House will say that Clinton was asked to suggest specific administration positions for Sestak, whether Clinton floated positions on his own, whether Clinton discussed other options not related to the adminstration [sic], or whether employment even came up at all in the talks...