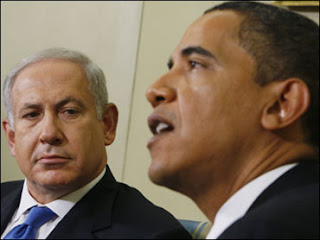 Reportedly, the the US was supposed to veto a resolution dealing with nuclear
non-proliferation in the Middle East. The resolution singled out Israel, but failed to mention Iran. The Israelis see this as a slap in the face and will put more strain on already fragile US-Israeli relations. The UN vote was Friday. Sunday, we heard a report Israel was flexing it's nuclear muscle by moving nuclear armed subs to the Gulf near Iran.

Washington's unprecedented backing for a UN resolution for a nuclear-free Middle East that singles out Israel has both angered and deeply worried the Jewish state although officials are cagey about openly criticising their biggest ally.

The resolution adopted by the United Nations on Friday calls on Israel to join the Non-Proliferation Treaty (NPT)...

But it was US backing for the resolution which has caused the most consternation among Israeli officials and commentators, who interpreted the move as "a resounding slap around the face" which has dealt a very public blow to Israel's long-accepted policy of nuclear ambiguity....

"In the secret talks that Netanyahu held with Obama's men... Israel was promised that the resolution would not focus on Israel and that if it did, the Americans would vote against."

Sounds exactly like "The Man with The Plan" to me-nothing can be trusted to oman, except his plan for New World Order business as usual-scrapping the USA. He's on top of that and it is the only priority.

if israel can have nukes, why not Iran?