Bizarre: Indian police hold pigeon under armed guard after it was caught allegedly spying for Pakistan 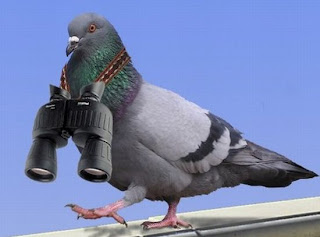 NEW DELHI — Indian police are holding a pigeon under armed guard after it was caught on an alleged spying mission for arch rivals and neighbours Pakistan, media reported on Friday.

The white-coloured bird was found by a local resident in India's Punjab state, which borders Pakistan, and taken to a police station 40 kilometres (25 miles) from the capital Amritsar.

The pigeon had a ring around its foot and a Pakistani phone number and address stamped on its body in red ink...

Officials have directed that no-one should be allowed to visit the pigeon, which police say may have been on a "special mission of spying".

Does water-boarding work on Pigeons?
Posted by Bluegrass Pundit at 5:33:00 PM

Did the pigeon squawk?

I heard it sang like a canary. Turns out it was just a common stool pigeon.

"I heard it sang like a canary. Turns out it was just a common stool pigeon."