Will Nancy Pelosi Have to Go Back To Flying On A Broomstick? 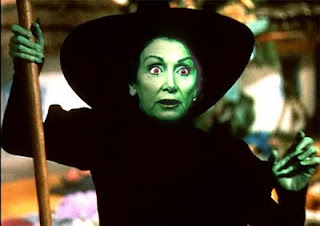 She may have to if one Congressman, Rep. Bill Posey (R-Fla), gets his wish. Pelosi has issued a House rules change requiring all members to fly coach on the taxpayers dime, but she flies on a private military jet, often with her family, while they wine and dine on the taxpayers dime.

Judicial Watch has received documents under Freedom of Information Act about Nancy Pelosi's use of military aircraft for travel. Pelosi has racked up over $2 million in expenses over the last two years. Over $100 thousand was for "in-flight services" like booze and food.

Rep. Posey is offering an amendment to the 2011 Defense Authorization bill which requires the speaker to lead by example and also fly coach.

And to help the speaker enforce the new rules, Posey said in an announcement, he is offering an amendment to the FY 2011 Defense Authorization bill which requires the speaker to lead by example and also fly coach. The move, he said, would spare taxpayers the $28,000 it costs per flight for her personal military aircraft when she travels back and forth to her home in San Francisco....