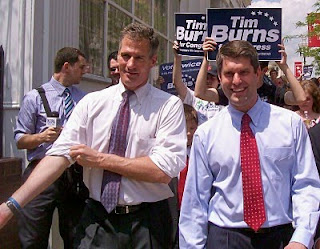 The Real Clear Politics poll average has Republican Tim burns up by 0.3% points over Democrat Mark Critz in the special election for deceased Rep. John Murtha's House seat. Burns received some last minute campaign help from new GOP Senator Scott Brown (see picture). The latest poll by PPP has Burns up by one. PPP is considered a democratic polling agency.

The special election to replace John Murtha looks to be headed for a photo finish, with Republican Tim Burns leading Democrat Mark Critz 48-47 in PPP's final poll of the race.