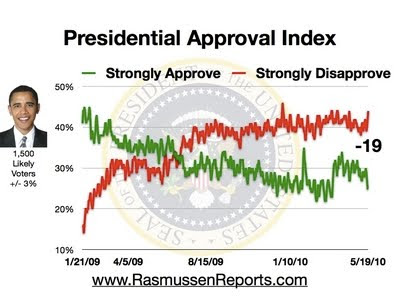 The Rasmussen Reports daily Presidential Tracking Poll for Wednesday shows that 25% of the nation's voters Strongly Approve of the way that Barack Obama is performing his role as president. Forty-four percent (44%) Strongly Disapprove, giving Obama a Presidential Approval Index rating of -19. Today’s rating is the lowest earned by the president since the passage of his health care proposal two months ago (see trends).