The New Black Panthers "Prepare For War" With The Tea Party 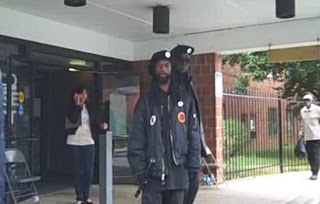 It is unclear why the New Black Panthers are worried about the Tea Party. After all, they have Eric Holder on their side. He dismissed voter intimidation charges after the government had a default judgment conviction.

“With the rise of the Tea Party, the white-right and other racist forces. With gun sales nationwide at an all time high amongst whites, with a mood that is more anti-Black than any time recent, it is imperative that we organize our forces, pool our resources and prepare for war!” Chairman Malik Zulu Shabazz, Esq. Convention Convener and Party Chairman.

Tell them to "bring it on."

i say come on down my street and you'll never see the other end hoodlums. Isn't it time the black man pulled himslef up by his own boot straps and made his own way? Why do we keep giving them preferences? For me they owe me a year wages because i was held out of the union i am in so it could be integrated. WHen will i get my check?

How pathetic. Get a job and grow up.

People, don't fall for the MSM attempt to turn races against each other. Black representation in the Tea Party matches their demographics in our population. The PTB are getting nervous, and can't have harmony and people working together. They desperately NEED to turn this into a racial issue. So far I haven't seen any racist element in the Tea part events, just less taxation, less government, and an expectation of honesty from our government. I would welcome any race or ethnicity that wants self sufficiency, and less government interference in pour lives. Please do not let them trick us into taking pour eye off the ball with this racial nonsense.

You want real racist and bigots just look at the Black Panthers, Racism in it's top form.

You can thank people who use the race card for political gain for creating anger and violence where none was.

If I were the Panther's I would start with blowing up the MSNBC satelites first and work my way down..