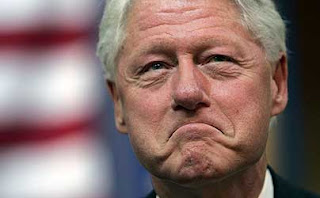 The left and labor unions are working to defeat two-term Democratic incumbent Senator Blanch Lincoln. It seems Lincoln may be to much to the left to win re-election in the general election this fall, but she is still too far to the right for labor unions and liberals. Bill Clinton is 'pounding' the podium in her defense.

Using unusually vivid language to describe the threat against Sen. Blanche Lincoln, Clinton urged the voters who nurtured his career to resist outside forces bent on making an example out of the two-term Democratic incumbent....

He pounded the podium with Lincoln at his side, warning that national liberal and labor groups wanted to make her a “poster child” in the June 8 Senate run-off to send a message about what happens to Democrats who don’t toe the party line.