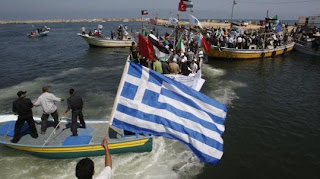 Israel warned they would not let the six-ship flotilla break their blockade of the Gaza strip. Pro-Palestinians and moonbats ignored the warning and some have paid with their lives. Reportedly, the activists planned to cause a violent confrontation.

Israel said the forces encountered unexpected resistance as they boarded the vessels. Dozens of passengers and at least five Israeli soldiers were wounded in the confrontation in international waters...

There were conflicting accounts of what happened early Monday.
An Al-Jazeera reporter on one of the Turkish ships said the Israelis fired at the vessel before boarding it. The Israelis, who had declared they would not let the ships reach Gaza, said they only opened fire after being attacked by activists with sticks, knives and live fire from weapons seized from the Israeli commandos. "On board the ship we found weapons prepared in advance and used against our forces," declared Israel's deputy foreign minister, Danny Ayalon.