American Soldiers in Afghanistan Ordered to Patrol With Their Weapons Unloaded? 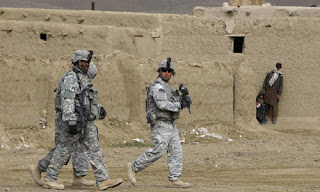 Many soldiers have complained the rules of engagement were to restrictive in Afghanistan. Now, we have a report soldiers are being forced to patrol without a round chambered.

American soldiers in at least one unit have been ordered to conduct patrols without a round chambered in their weapons, an anonymous source stationed at a forward operating base in Afghanistan said..

When a weapon has a loaded magazine, but the safety is on and no round is chambered, the military refers to this condition as “amber status.” Weapons on “red status” are ready to fire—they have a round in the chamber and the safety is off...

This is Obama "getting tough" in Afghanistan.