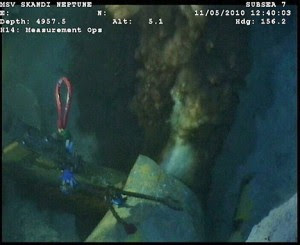 The blowout preventer and well casing was considered to be substandard quality and at risk of damage under high pressure. BP gave "special permission" for it to be installed. That has proven to be a multi-billion dollar mistake.

The documents show that in March, after several weeks of problems on the rig, BP was struggling with a loss of “well control.” And as far back as 11 months ago, it was concerned about the well casing and the blowout preventer.

On June 22, for example, BP engineers expressed concerns that the metal casing the company wanted to use might collapse under high pressure....

Though his report indicates that the company was aware of certain risks and that it made the exception, Mr. Hafle, testifying before a panel on Friday in Louisiana about the cause of the rig disaster, rejected the notion that the company had taken risks.

BP is going to have to find a scapegoat. I wonder who?