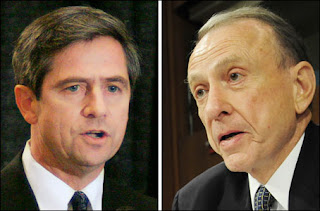 Rep. Joe Sestak again confirmed the White House illegally offered him a job if he would drop out of the Pennsylvania Democratic Senate primary race against Arlen Specter. The confirmation came in an interview on Sunday's NBC's "Meet the Press." Sestak is still refusing to say what job was offered, but many have speculated it was Secretary of the Navy. The video is embedded below.

Rep. Joe Sestak, winner of the Pennsylvania Democratic Senate primary, is refusing to provide more information on what job he was offered by a White House official to drop of that race, although he confirmed again that the incident occurred...

"It's interesting. I was asked a question about something that happened months earlier, and I felt that I should answer it honestly, and that's all I had to say about it." Sestak said Sunday on NBC's "Meet the Press." "Anybody else has to decide on what they will say upon their role. That's their responsibility."

Yet Sestak confirmed to NBC's David Gregory that the incident did take place.