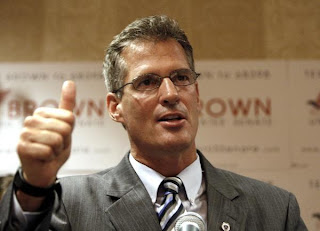 Harry Reid became angry at GOP Senator Scott Brown for not voting to end debate on the financial regulations bill. In the past, Harry Reid has been able to depend on the 'Kennedy seat' to vote his way, but elections have consequences.

Moments after narrowly losing a key vote on the hotly contested Wall Street reform bill Wednesday, Senate Majority Leader Harry Reid told a news conference that another senator “broke his word with me...

An aide to Brown confirmed that the senator had signaled to Reid he would vote for the motion to end debate..