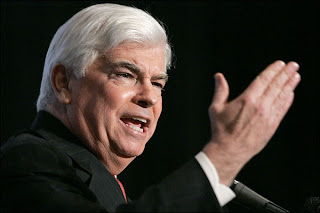 That's right. Democrats don't want to pin any blame on their "messiah." First they blamed BP. Then, they blamed Dick Cheney. Then they tried to get reporters to quit asking so many questions. Now, they have resorted to their emergency fall back plan. Chris Dodd is blaming former President Bush.

“To lay this at Obama’s doorstep, in light of years and years of regulatory permissiveness when it comes to these kinds of operations occurring — it didn’t occur in the last year and a half,” he said. “I mean, you know that as well as I do. You can’t lay this all at Obama’s door anymore than I can say,” Dodd responded.

Mister Dodd has HIS OWN bad policies to be accountable for, him and that hot dog Frank!