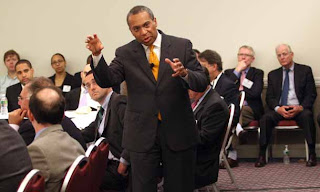 In the same speech, Gov. Deval Patrick decried partisanship in Washington. It doesn't get much more two-faced than this.

Governor Deval Patrick, even as he decried partisanship in Washington, said today that Republican opposition to President Obama’s agenda has become so obstinate that it “is almost at the level of sedition.”..

Merriam-Webster.com, the dictionary site, defines sedition as “incitement of resistance to or insurrection against lawful authority.”

Join a union, suffer the consequences of its failure to provide, just as you reap the benefits of it successes. It's not my fault they can't manage their own money for the benefit of it's participants.