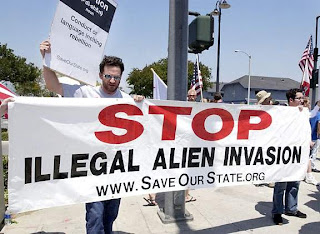 Many political analysists are telling republicans to tread lightly on toughening immigration laws. Hispanics are a rapidly growing voter demographic. Democrats are trying to use the Arizona immigration ID law as a political issue. It doesn't look like a winner with the majority of the electorate. Americans support tough new state laws by a margin of 2-to-1.

A Fox News poll finds 65 percent of American voters think states should have right to make their own immigration laws and protect their borders “if they believe the federal government has failed to act,” while 32 percent disagree. Moreover, a 52 percent majority favors their own state passing a bill similar to Arizona’s new immigration law. Some 31 percent would oppose it and another 18 percent is unsure...

Fully 84 percent favor requiring people to show documents proving their immigration status, if officials have reasonable cause to ask for them.