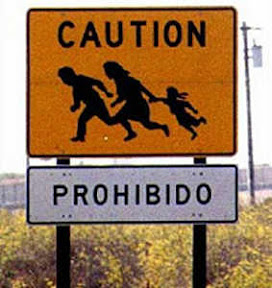 The Mexican government is OK with President Obama's decision to send 1200 National Guard to the Arizona border as long as they only look for organized criminals. They should ignore the illegal immigrants running past them.

STATEMENT BY THE EMBASSY OF MEXICO

Regarding the Administration’s decision to send 1,200 National Guard servicemen to the US Southern border, the Government of Mexico trusts that this decision will help to channel additional US resources to enhance efforts to prevent the illegal flows of weapons and bulk cash into Mexico, which provide organized crime with its firepower and its ability to corrupt.

Additionally, the Government of Mexico expects that National Guard personnel will strengthen US operations in the fight against transnational organized crime that operates on both sides of our common border and that it will not, in accordance to its legal obligations, conduct activities directly linked to the enforcement of immigration laws.

So now Mexico is controlling America's immigration enforcement polices telling Homeland Security how they should use our National Guard troops. Does a spineless president come to mind?

Who gives a "crap" about what "mexico" says about our immigration policies. When does mexico have any rights about telling us they are enraged. Get over it mexico! Look at your own laws regarding illegal entry into your country. I guess they must be the most "racist" and discriminatory laws that exist. The bottom line is that Mexico does not want the flow of billions of untaxed dollars to stop into Mexico. Mexico has never been an independent nation since independence from Spain. Just by Mexico's present day actions regarding illegal immigration, she is dependent upon the U.S. Mexico has become the step-child of the U.S. The mexican elite are very wealthy along with a enormous oil reserves, they should pay for the services that their illegals use here in the U.S.