Green Fail: Too Many Solar Cells May Cause Electricity Costs to Rise in Australia 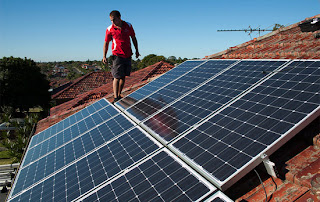 Rooftop solar panels in Australia are overloading the electrical infrastructure and causing load swings. In order to prevent this, costly upgrades will be needed.


THE runaway take-up of rooftop solar panels is undermining the quality of electricity supplies, feeding so much power back into the network that it is stressing the system and causing voltage rises that could damage household devices such as computers and televisions.

Power distribution lines and home wiring were designed for electricity to flow from power stations to appliances, but households with solar panels do the reverse of this.

One of Australia's biggest electricity network providers, Ausgrid, yesterday warned that there was a "significant likelihood" that costs would have to rise because of the impact of the solar photovoltaic cells.

In a letter to the NSW pricing regulator, obtained by The Australian, Ausgrid warns that in areas with a high concentration of solar cells, voltage levels can rise and this can have "consequences for appliances and equipment in customers' homes". It can also cause solar systems to switch off....

Mr Hart said the size of conductors and cables in the streets would have to be upgraded "so it can handle lots of solar, versus times when there's lots of load and no solar".

"If you get a very, very hot night and there's obviously no solar, the mains voltage is going to drop a lot," he said. "If your wires aren't up to it, you've got a problem."